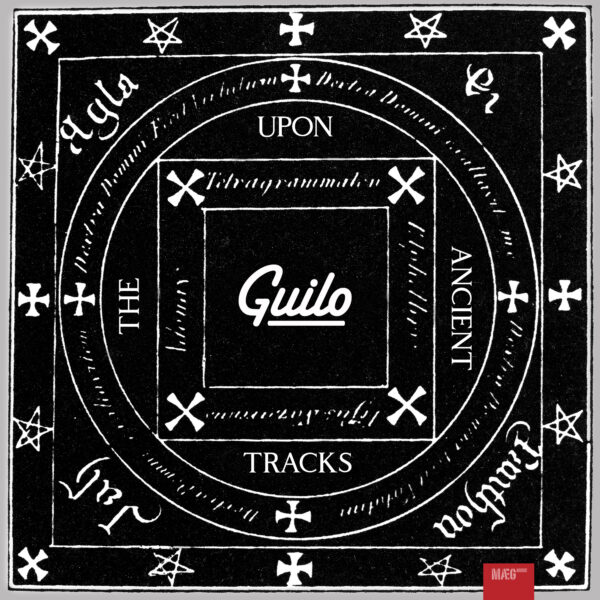 Upon The Ancient Tracks by Guilo

Simon Christophers’ Guilo project produces music of arcadian beauty and of circadian disquiet, a sound that is both joyous and disturbing, reverential and satanic.  Upon The Ancient Tracks, the third album from Guilo is the first one that feels as if one has been given an invite into a private world of secret thoughts and delicate delights that allows one to forget the plunge into dystopia instead floating through via an uneasy space between societal turmoil and internal monologue.

Ancient Tracks is the product of what Guilo has described as an extended period of pleasured anxiety, and it sounds like it, full of wraithlike frequencies and fibrillating pulses. That’s not a huge surprise: Guilos material has always sounded delightfully anxious… Incline Thine Ears (2011), Simon Christophers debut outing as Guilo, largely succeeded in channeling the decade’s post-millennium tension into compellingly moody abstractions, later that year flushed on creative freedoms Guitarra, compiled outakes and collaborations that contrasted ITE’s singularity  – mining similar viens but diging up some rarer ore with the help of cohorts (relationships that he has rekindled and added to augment this latest release).

Through that, Christophers,  long a fan of left-of-center music, pulls in sonic references, modal and harmonic from the vanguard, moving beyond contemporary fashion. Yet for all the music’s heavy structure, it isn’t obviously mapped to a rhythmic grid: It slips and slides all over the place, wheezy melodica feints… synths rise, timables lead.

Track after track, Guilo provoke the listener, stressing the importance of stripping back. It’s remarkable how much he can make out of so little: The best here get by on the strength of just one or two elements, a handful of electronic drum sounds—mostly just scraped white noise, plus the occasional booming kick drum—and his use of voice, processed and layered as often as is needed.  Every element practically dares you to so much as ask for any further accompaniment.

Upon The Ancient Tracks is a complex and involving instrumental journey through delicate and disturbed electronica and nu folk/nu classical. All things told, this is a gorgeous album from start to finish, without a weak track amongst its number. The overall effect makes Upon The Ancient Tracks feel like the world’s first baroque-Krautrock-folk-rock-Michael Nyman-album. But more than all that, it is genuinely very beautiful.